Dispute has always been overpowered by the charming surroundings of Kashmir. Irrespective of the turbulences that the region has faced, tourism has always boomed significantly. Both the domestic and international tourists flock to Kashmir to enjoy the amazing beauty of the Himalayas. It is seen that most of the people across this state are Islam but then there are many Hindus temples as well.

There are a number of ancient Hindu temples and pilgrimage sites that are frequently visited by pilgrims and ‘Sadhus’. At the same time there are some more recent temples that are worth a visit. Among all the places in this state the small town of Bhadarwah has the most number of Hindu temples and one such temple is Lakshmi Narayan temple. 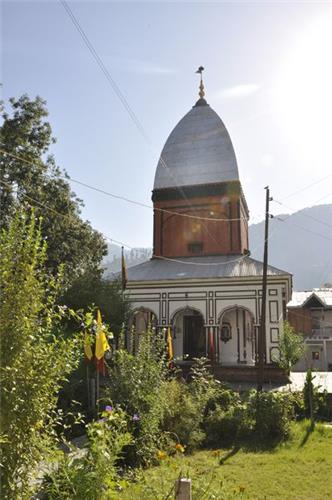 Here in this article we will highlight various significant historical myths as well as importance of this ancient Hindu temple.

Jammu and Kashmir saw a Hindu Rajput dynasty on the throne since the middle of the 19th century. The Dogra dynasty ruled Kashmir till princely states ceased to exist after the independence of India. It was during the reign of the last Dogra ruler, Maharaja Hari Singh, that the Lakshmi Narayan Temple was built.

Wazir Sobha Ram was the Prime Minister in the court of Maharaja Hari Singh. He was a resident of Sarolbagh. It was under Wazir Sobha Ram’s orders that the Lakshmi Narayan Temple was built.

In a day and age when labourers were paid in paisa, it was believed that the construction of the temple cost a lakh. The idols of Lakshmi and Narayan are made of white marble. The two idols are placed within the temple while the outer wall holds idols of many other Gods and Goddesses. A path surrounds the temple, allowing visitors to pay respect to all the idols. Grandeur of the entrance gate is something that is sure to mesmerize the visitors. 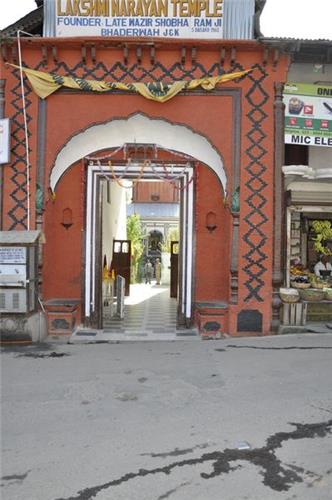 Next to the temple there is an inn where the pilgrims can enjoy an affordable stay. It is said that the people who come here with strong belief in God surely get their wishes fulfilled.

The Lakshmi Narayan Temple is located in the Bhaderwah, Doda district of Jammu and Kashmir. Nearest railway station to the temple is the Jammu Tawi Railway station.

If you visit the Lakshmi Narayan Temple of Bhaderwah prepare to be stunned by the grandeur and moved by the history. This is a temple that must be visited by both pilgrims as well as tourists.